While responding to a question by MP R Parthipan and Joice George on government’s plan to double farmers’ income, Minister of State for Food Processing Industries Sadhvi Niranjan Jyoti, during the ongoing winter session in Parliament, had replied in ‘No’ to the question.

The answer, which was available on the Lok Sabha website can be read below: 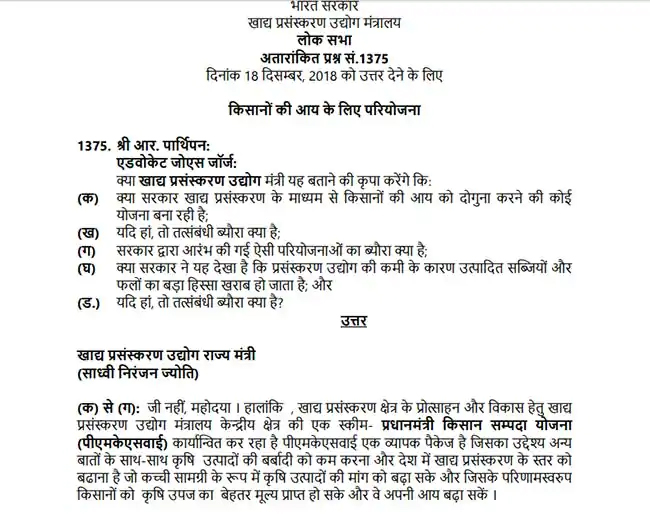 This answer was given on December 18. However, three days later, on December 21, the answer available on the Lok Sabha website was altered.

The website has removed the main word from the answer i.e. ‘No’.

“जी, नहीं, महोदया” (No, Sir) has been removed from the answer available on the Lok Sabha website. 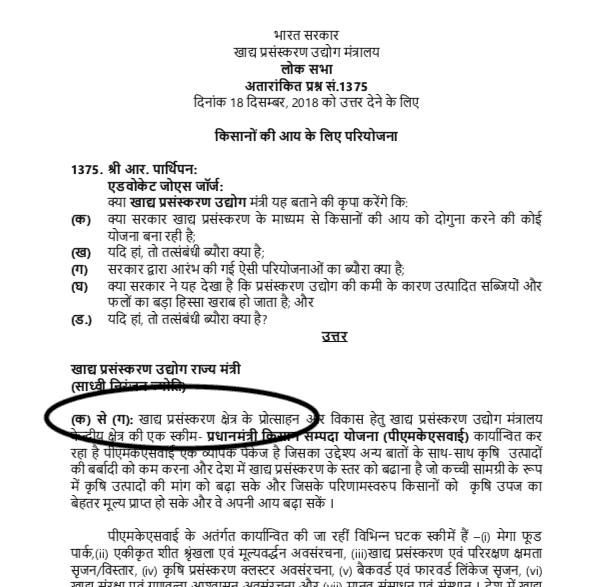 In the past, Prime Minister Narendra Modi and other cabinet ministers have time and again claimed to be working towards doubling the income of farmers.

PM Modi has often said that his government is working in the direction to double  the incomes of farmers by 2022.

Criticising the government’s reply, Congress national spokesperson Priyanka Chaturvedi said, “These alterations in the response are hardly surprising coming from a government that has been fraudulent to the farmers and working towards their welfare.”

“Every single promise PM Modi have made to the farmers has been proved a jumla whether it is MSP, drought relief, debt relief or doubling their income. It goes on to show the insensitivity of a government that came on the back of the promises they made to the farmers but abandoned them immediately after coming to power. This is truly a suit boot Sarkar – of the corporates, for the corporates and by the corporates,” News Central 24×7 quoted Chaturvedi as saying.